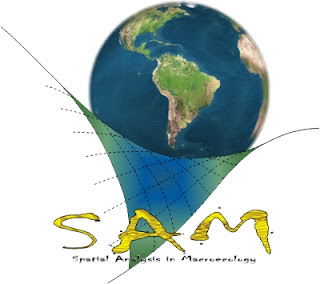 Macroecologists and biogeographers now recognize that nearly all biodiversity data show strong spatial autocorrelation, driven by spatially structured environmental variation and/or by dispersal mechanisms. Although spatial autocorrelation analysis was introduced in the late 1970s (Sokal & Oden 1978a,b), only recently ecologists really started to pay attention to these issues (Legendre 1993, Diniz-Filho et al. 2003). That is why we started a project a few years ago, to design a new software for spatial analysis named SAM (Spatial Analysis in Macroecology). The idea was to create an integrated and user-friendly software package that could be easily used by researchers to analyze spatial data, as well as a platform to teach spatial analysis in undergraduate and graduate programs. The first version was released in September 2005 (Rangel et al. 2006a), and SAM recently achieved more than 2,500 users worldwide since this first release.

So far, more than 20 courses on spatial statistics were given by the authors, in more than 20 graduate courses and conferences, worldwide. Authors are available to give lectures on Spatial Statistics and SAM. SAM courses can be discussed under formal invitation of academic units, and are mainly directed to students in ecology, evolutionary biology, biogeography and macroecology. These courses are free of charge, although the SAM project does not include funding for such courses, so we require that travel and daily expenses be paid by those who are inviting us. 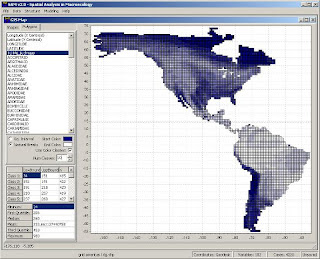 A new SAM version (2.0) has been now officially released (May 2007), after a first trial of tests during a SAM workshop held on January 9, 2007 in the 3rd Biannual Conference of the IBS in the Canary Islands (see Rangel et al. 2006b). The program is freely available at http://www.ecoevol.ufg.br/sam/ (permanent URL at http://purl.oclc.org/sam/). The new version is basically the result of the feedback from the hundreds of users around the world and will include important modifications regarding data input and output, and also a new module on K-means cluster analysis, which can be spatially constrained or not (Diniz-Filho & Bini 2005), and a number of updated features (Dutilleul 1993, Legendre et al. 2002, Griffith & Peres-Neto 2006). More importantly, SAM now integrates more directly to Geographic Information Systems, by allowing users to open and export data to ESRI® shapefiles.

Thus, SAM users have now all the tools needed to import both data on the distribution of species (e.g. available at http://www.natureserve.org/) and environmental variables (e.g. remote sensing data) that characterize the landscape of the domain of interest. Help file was also improved, becoming nearly a manual for spatial analysis. All these features make SAM a nearly complete platform to investigate patterns in biodiversity. Finally, SAM is growing fast, and new modules, such as Geographically Weighted Regression, Ripley's K, Path Analysis, Logistic Regression, are planned for the next version, to be released by the end of 2007 .