Do microorganisms have biogeography? 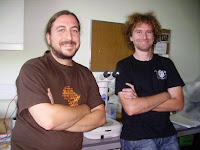 Zoologists and botanists look to exotic places in order to find interesting new species and higher taxa. Over the last few centuries, scientific expeditions in remote places have indeed discovered new species and even higher taxa of limited distribution. Such discoveries still occur in recent years. The new insect order Mantophasmatodea in Namibia and Tanzania (Klass et al., 2002) was only known from fossil specimens in amber (Arillo et al., 1997). Even recently the new rodent species Laonastes aenigmamus was found in Laos; a new family was proposed to classify this species (Laonastidae; Jenkins et al., 2004), although it was later included in the Diatomydae (Dawson et al., 2006), a family that was also known only from fossil remnants (Mein & Ginsburg, 1997). The fact that in both cases these new higher taxa were already known from fossils does not diminish the need to explore remote areas to find new living branches in the macroscopic part of the tree of life. 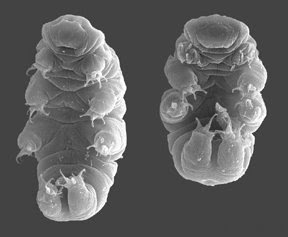 Hypsibius dujardini (phylum Tardigrada).
Picture by Willow Gabriel and Bob Goldstein / Public Domain. Source: http://tardigrades.bio.unc.edu/.
In contrast, collecting samples in remote areas, scientists working on the less-known microscopic organisms (smaller than 2mm) invariably found species and higher taxa that could be ascribed to taxa already known from Europe (Fenchel & Finlay, 2003). Once completely new higher taxa are discovered, they are quickly found to be widely distributed. The recently described microscopic animal phyla, Loricifera from marine sediments off the coast of France (Kristensen, 1983), Cycliophora on the mouthparts of lobsters in Denmark (Funch & Kristensen, 1995) and Micrognathozoa in cold springs in Antarctica (Kristensen & Funch, 2000), have all been suddenly found in regions very distant from the original type locality, but in similar habitats, which were in fact previously unexplored (Todaro & Kristensen, 1998; De Smet, 2002; Nedved, 2004).
The difference between macro- and microorganisms can be illustrated with the example of what is actually found when a small region is surveyed. Forty-eight Tardigrada species were found in an extensive survey of rock mosses and leaf litter of a mountain range at the Iberian Peninsula (using tiny 3x3 cm cores) (Guil, 2008). From these, only six species (12.5%) are only known from a single continent (Europe). This count includes two new species that, obviously, are only known from Central Iberian Peninsula. At least for now. Taxonomical and biogeographical knowledge on the phylum Tardigrada is far from being complete, and is seriously unbalanced through the regions of the world (Guil & Cabrero-Sañudo, 2007). However, this example illustrates that the communities of microscopic organisms host high proportions of widespread and cosmopolitan species, to the extent that 20% of all known bdelloid rotifers have been found in a small Italian valley (Fontaneto et al., 2006), and 50 % of all named species of heterotrophic flagellates have been recorded in a small Danish Bay (Fenchel and Finlay, 2004).
It is commonly thought that most species have restricted distributions (see, e.g., Gaston, 2003). However, very few microbiologists will endorse such a statement (see, e.g., Fenchel & Finlay, 2003, 2004). Why do microscopic and macroscopic organisms differ so widely in their patterns of distribution? The Baas-Becking (1934)’s hypothesis, also known as the “Everything is Everywhere” (EisE) hypothesis, encapsulates the classical view that microscopic organisms are globally distributed due to their high potential for dispersal (Kellogg & Griffin, 2006). Small size and an ability to enter dormancy, and therefore to produce dormant propagules (Cáceres, 1997; Bohonak & Jenkins, 2003; Fenchel & Finlay, 2004), might explain why prokaryotes and some microscopic eukaryotes, such as protists and small invertebrates, have acquired global distributions.
The assumption that organisms smaller than 2mm have cosmopolitan distribution often holds true when species are defined using traditional taxonomy. However, the EisE hypothesis has been challenged recently. Recent molecular evidence reveals distance-decays in the similarity of microorganisms belonging to the same traditional species in a variety of microscopic organisms, including prokaryotes (Cho & Tiedje, 2000; Whitaker et al., 2003), protists (Darling et al., 2004; Foissner, 2006; Telford et al., 2006), and fungi (Taylor et al., 2006). Other studies have found cases of restricted distributions solely by re-evaluating morphological evidence within species previously assumed to have cosmopolitan distributions (Smith & Wilkinson, 2007). All this evidence points out that there might be a high degree of cryptic diversity in the microbial world, and that there are more restrictions to the dispersal of microscopic organisms than previously thought. 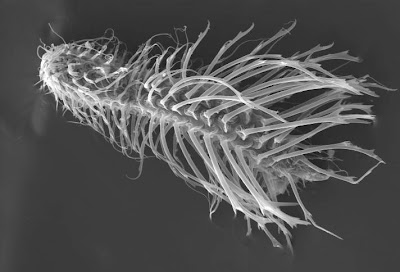 Chaetonotus sp. (phylum Gastrotricha).
Picture by M.A.Todaro. Source: http://www.gastrotricha.unimore.it/
The current debate on the EisE hypothesis divides scientists in two major groups (Whitfield, 2005). On one side, scientists following the EisE hypothesis in its original form assume that species differences in samples from different areas occur because of environmental differences, and not because of restricted dispersal. Thus, they consider that “everything is everywhere, but the environment selects” is the rule for microorganisms (e.g. de Wit & Bouvier, 2006; Fenchel & Finlay, 2006). On the opposite position, other scientists propose that classical morphological taxonomy of microscopic organisms is not able to resolve their actual diversity, and therefore that cosmopolitan ranges result from misidentification and lumping of spatially isolated lineages (e.g. Coleman, 2002; Foissner, 2006; Taylor et al., 2006).
The straightforward way of solving this debate would be to determine if environmental selection by microorganisms (i.e., environmental filtering) does actually cause reproductive isolation and/or limits gene flux. It has been argued that it would be difficult to falsify the EisE+environmental selection hypothesis, because there could be unmeasured aspects of the environment that differ consistently among regions (Foissner, 2006). However, if we assume a dense sample of equivalent habitats across sampling regions, the hypothesis makes clear predictions about genotype distributions. If EisE is the rule, the degree of genetic relatedness between two individuals should be independent of the geographic distance between them, except that individuals within a habitat patch might be more closely related to one another than those in different habitat patches. Conversely, if EisE does not hold true, spatially explicit models should work in the same way as they do for macroorganisms, and genetic diversity should be related to geographic distances by a classical distance-decay relationship.
Microscopic animals can be used as a model to test the EisE hypothesis, to assess (i) if there are environmental effects on the distribution and composition of microscopic assemblages, and (ii) if there are environmentally- or distance-driven genetic differences among the individuals of the same evolutionary entity (i.e., the same taxon). On the one hand, environmental effects on microscopic communities across space have been tested in very few model organisms; up to now empirical studies are available only for local samples for bdelloid rotifers (Fontaneto et al., 2006), tardigrades (Guil et al., conditionally accepted), and mites (Valdecasas et al., 2006). These studies show contrasting results. While habitat filtering seems to be important at the landscape scale for bdelloid rotifers and tardigrades, water mites show only weak associations with habitat. On the other hand, explicit genetic tests on the strength of spatial patterns (such as distance-decay relationships) have been performed only for two genera of bdelloid rotifers (Fontaneto et al., 2008), and for one species complex of monogonont rotifer(Brachionus manjavacas; Gómez et al., 2007; Mills et al., 2007). These studies confirmed that even microscopic animals have biogeographies and show persistent genetic signature of colonisation.
Undoubtedly, more studies on the diversity patterns of microorganisms, dispersal abilities and their phylogeographic structure are yet needed (Jenkins et al., 2007). Supporting or denying the EisE hypothesis needs much more work at different spatial scales, and also a comprehensive coverage of other groups of microscopic organisms, including bacteria, protists, microscopic algae, animals and fungi. However, the potential of microorganisms for biogeography and macroecology might go far beyond than merely solving the question of whether they are truly widespread, or not. As said before, we know that at least a few groups show responses to microenvironmental differences, which sometimes can be very narrow. Little is known about the exact nature of these responses, but identifying the particular responses of individual species provides a way of tracking environmental changes by comparing the composition of microbial assemblages. This, together with ubiquity of some microscropic groups, makes them potential candidates to be used as universal indicators, allowing comparisons between very distant places distributed worldwide.

The monogonont rotifer Brachionus manjavacas.
Picture by Diego Fontaneto and Giulio Melone
Apart from that, microhabitats in nature provide means of testing biogeographical hypotheses, as exemplified by the analysis of the species-area relationship carried out by Bell et al. (2005). They assumed that water-filled holes at the base of large beech trees are independent islands sharing the same bacterial species pool, and measured species richness as bacterial genetic diversity, and island size as water volume in each tree-hole. The species area relationship (measured as a power law) was highly significant, and showed a slope similar to the one found in many macroscopic continental island systems. This is just an example of the silent revolution undergoing in microbial ecology (Prosser et al., 2007). Microbial model systems are already being used to re-analyze part of the current theoretical body of ecology and biogeography (Jessup et al., 2004), which until recently have been almost exclusively based on macroscopic organisms.
A better knowledge on the biology of some groups of microorganisms and the molecular techniques now available can help solving two of the major drawbacks of biogeography as a hard science: the impossibility or extreme difficulty of performing experiments, and the limited number of real world examples that can be used to evaluate the proposed hypotheses and/or models. Contingency makes the evaluation of concurrent hypotheses on the distribution of biodiversity very difficult (see, e.g., Hawkins, 2008). We believe that some microorganisms provide a mean to make true experiments in biogeography, for they allow setting up experimental designs affordable in terms of time and money. For example, being the dispersal of some of them potentially unlimited and passive at the same time, they can allow formal tests of the neutral theory (Hubbell, 2001). By adding filters to dispersal and/or designing experimental islands with particular characteristics, experiments on island biogeography can also be made. Some groups, such as bacteria, or the bdelloid rotifers, tardigrades and mites mentioned above, can provide manageable study systems and help establish the basis of a harder biogeographical science. 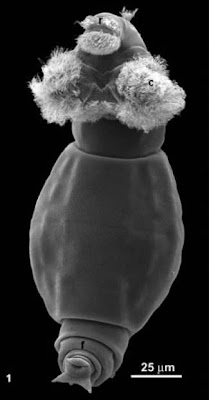