Azorean arthropods do it fast in dark caves

Azorean arthropods have diversified according to the age, area and relative isolation of each island within the archipelago. However, each group experiences these factors differently; hence their patterns of diversification differ according to their particular life histories. This is the main finding of a study conducted by Joaquín Hortal from the NERC Centre of Population Biology of the Imperial College, and Paulo Borges from the Azorean Biodiversity Group (CITA-A) of the University of the Azores, recently published in the Journal of Biogeography. The authors show that although the shape of the relationship between diversification and time is in general the same, different groups show different rhythms of evolution. They reach these conclusions within the first independent evaluation of the General Dynamic Model of Oceanic Island Biogeography, recently proposed by Robert J. Whittaker and colleagues, which merges the geological evolution of islands with the biological evolution happening on them. Borges and Hortal used the framework provided by this new model to study the relationship between the number of species that are single island endemics (i.e., exclusive of each island) and the age, area and isolation of each island. 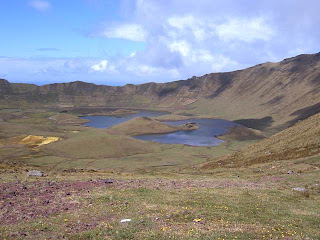 'Caldeira' of Corvo, the smallest island of the Azores
Within the Azores, cave species appear to have evolved quite quickly, producing a number of species during the initial stages of development of the islands, when cave systems formed by lava tubes and volcanic pits were abundant and pristine due to the high volcanic activity. When the islands settle, cave systems start to collapse, diminishing the area available for cavernicolous species, which eventually end up either facing extinction or surviving in the small crevices of the soil under the forest. This rapid pace of diversification and early decline is exclusive to cave arthropods and does not appear to be evident for the other arthropod groups studied. In most islands some lineages are still evolving into new species, so older islands show more exclusive species than younger ones, except for the older island, Santa Maria, where some groups show some decrease in the pace of diversification. Such differences between groups are caused by the opposing roles of the two components of diversification. When speciation is predominant, diversification is positive and the number of endemic species on an island increases. This pace slows down as extinction takes the lead, and diversification gets slower and eventually negative when the islands age and erode and they start to lose species numbers. While for most arthropods the Azores is a land full of opportunities, those inhabiting caves already feel the pressure of living in aging islands.

Other factors, such as dispersal capacity, also affect the pace of diversification within the Azores, suggesting that the diversity of evolutionary responses in different kinds of organisms is so wide that no general model, like the one proposed by Whittaker and colleagues is able to predict the pattern and process of diversification of all living groups. What this model does, however, is to allow integration of deviations from the general pattern into a common theoretical framework. By relating these deviations with the particular characteristics of each group, we might be able to ascertain how and why evolutionary processes happen on the isolated archipelagos that constitute some of the few long-term experiments provided by nature.