The term “sky islands” sounds intriguing, but it may be more lyrical than useful when discussing mammal distributions, according to new research from Eric Waltari of the Sackler Institute of Comparative Genomics at the American Museum of Natural History and Robert Guralnick from the University of Colorado at Boulder. The team used an emerging technique, ecological niche modeling, to show that the populations of small mammals living on mountaintops in the Great Basin—on islands in the sky—are not as isolated as previously thought. 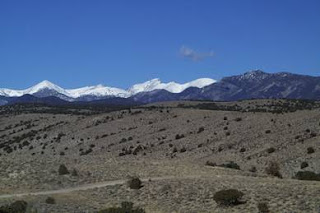 Great Basin National Park (Nevada). Courtesy of the National Park Service.
In the new paper published in the Journal of Biogeography, Waltari and Guralnick test the concept of geographic isolation on thirteen species of small mammals. The species chosen were mapped with current and past climate data to “backcast” the distribution of each species at the height of the last ice age 21,000 years ago. The predictions of the model are calibrated with known fossil records. Backcasting allows researchers to test whether species had different distributions in the past; the current study, for example, found that most of the species (12 of 13) lived at lower elevations 21,000 years ago and that the average distribution of each species was larger than it is now.
Determining the area that species inhabited in the past helps researchers understand current population distribution within the Great Basin and potential linkages between “sky islands.” Many of the species in this study (9 of 13) had suitable habitat below their current range that could link different populations. This surprising result can be further tested with molecular research. Waltari and Guralnick also found that not all species were widespread across the basin 21,000 years ago, highlighting the idiosyncratic nature of species’ responses to climate change.
“Niche modeling is a quick and straightforward approach to addressing problems that molecular data will eventually solve,” says Waltari.