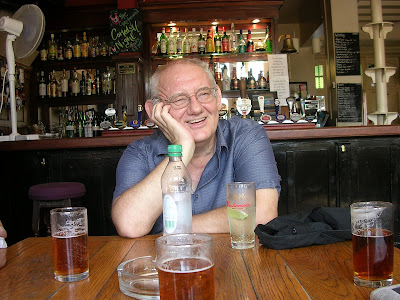 It is our sad task to record the death of Professor Chris Humphries, merit researcher in the Botany Department (of the Natural History Museum, London) until his retirement in 2007, on Friday 31 July. Chris was a leading figure in the cladistic revolution in systematics and biogeography. Without his tireless efforts, systematic botany – perhaps systematic biology – would be a very different beast.

Chris joined the Botany Department in 1972 as an assistant curator, a nearly-finished PhD student, coming directly from Vernon Heywood’s Botany Department in Reading University. With the exception of three sabbaticals – two of them at the University of Melbourne (1979–80, 1986) and a six month stay as a fellow at the Wissenschaftskolleg zu Berlin (Institute forAdvanced Study, Berlin) in 1994 – Chris spent his entire career in the Museum.
Chris’s early botanical research was on Asteraceae (daisies) and Macaronesia but during the 1970s and 1980s most of his intellectual effort went into developing, exploring and promoting cladistic systematics and cladistic biogeography. These efforts yielded two much acclaimed books: Cladistic Biogeography (1986) (with Lynne Parenti, of the Smithsonian; a revised 2nd edition appeared in 1999) for biogeography, and Cladistics: A practical course in systematics (1992) (with staff of the Natural History Museum; a revised 2nd edition appeared in 1998 as Cladistics: the theory and practice of parsimony analysis). Both books became standard works in their field.
Chris’s interest in art made him the perfect choice for organising and annotating the first complete full-colour edition of Banks’ Florilegium, published between 1980 and 1990. The project marked the beginning of Chris’s love affair with Australia and her flora, the enigmatic southern beeches and the problems of explaining organism distribution in the Southern Hemisphere. The Florilegium consists of over 700 botanical line engravings made from Sydney Parkinson’s watercolours, recording the plants collected by Joseph Banks and Daniel Carl Solander on Captain James Cook’s first voyage around the world (1768-1771).
After 1990, Chris (with Dick Vane-Wright and Paul Williams, both of the Entomology Department) put biogeographical matters to more practical use, addressing what they called the 'Agony of Choice' – the conservationists’ dilemma – with their ‘WorldMap’ approach to conservation biology, combining taxonomic, ecological and biogeographic information into one system. After a decade of collaboration with many different and diverse groups of researchers working on many different organisms, Chris returned to more fundamental matters in biogeographical investigation and to the distribution of plants on Macaronesia, the islands he began with as a student.
During his career, Chris received many honours; the Linnean Society’s Bicentenary Medal in 1980 and their Gold Medal in 2001; he was also an Honorary Fellow of the American Association for the Advancement of Science. He was President of the Systematics Association (2001-2003) as well as its Treasurer (1996-99), and President of the Willi Hennig Society (1989-1991), being elected a Fellow honoris causa in 1998. Chris was also Vice-President and Botanical Secretary of the Linnean Society (1994-1998).
In 2008, a three-day Meeting was held in his honour at the Linnean Society; a Festschrift will be published in early 2010.

David Williams and Charlie Jarvis
Image: courtesy Dick Vane-Wright
note from Miguel Araújo: Chris was a good friend, and a founder member of the IBS (International Biogeography Society).
Published by Miguel B. Araujo